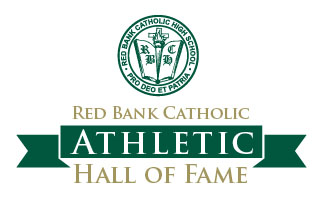 For over 85 years, outstanding Casey athletes, teams and coaches have built a reputation for excellence and sportsmanship.  Their achievements have brought honor to our school, and we now honor them.  In 2015 Red Bank Catholic established an Athletic Hall of Fame, and on June 18, 2016, we held our first Annual Athletic Hall of Fame Induction Ceremony to celebrate the accomplishments of the Inaugural Class.

Graduates of Red Bank Catholic understand the camaraderie and Casey Spirit that binds us to this institution.  In honoring these individuals, we cherish our legacy but also make a commitment to open the doors of our school wider to young men and women lacking the financial means to gain admittance.  We believe in the benefits of a Catholic education, and we endeavor to make it available to all who wish to join the Red Bank Catholic student body.

In support of this goal, we will dedicate 100% of net proceeds raised each year by the RBC Athletic Hall of Fame to financial assistance for deserving students.

The 2020 Class of the RBC Athletic Hall of Fame will be inducted on Saturday, October 23, 2021 with a program to be held in the RBC Vincent J. Eck Student Center.

The 2018 Class of the RBC Athletic Hall of Fame will be inducted on Saturday, June 23, 2018 with a program to be held in the RBC Vincent J. Eck Student Center.

Event details and ticket information will be available February 2018 on the school website. For questions, please email: athletichof@redbankcatholic.com.

The Red Bank Catholic website will be updated with information regarding purchasing tickets and Ad Journal space for the June 23rd Hall of Fame Induction Event.  If you have questions, please contact us at: athletichof@redbankcatholic.com or call Kate Gotta or Anne Clabby Byrnes in the Alumni Office at 732-747-3256.

Below is a listing of the inductees, along with their RBC graduation year and highlights of their athletic accomplishments:

This class also includes six outstanding individuals and two teams who previously were inducted into the Red Bank Catholic Alumni Hall of Fame:

Monsignor Joseph T. Casey: After serving in the Navy in WWI, the retired Rear Admiral returned to St. James parish to serve as pastor. He oversaw the rapid growth of Red Bank Catholic High School and instituted a full-scale athletic program at the school, hired the first full-time Athletic Director and donated his Navy pension to buy uniforms and equipment for the teams. Our students today are still proud to call themselves Caseys.
Tom Lalli (Football-‘63): RBC football player, Head Football Coach and Vice Principal. Played football for University of Maryland
Ann Woods Smith (Gymnastics-‘78): Led RBC Gymnastics Team to four NJ State Championships, and was an alternate on the 1980 US Olympic Team.
Harry Flaherty (Football-‘80): RBC All-Shore player, played for Holy Cross, the NFL and the WFL, and was drafted by the Philadelphia Eagles.
Jack Rafter (Cross Country Coach and Athletic Director - ’63-’93): “Father” of Girls Sports at the Shore, at the time of his retirement he was the all-time winningest Cross Country Coach in the nation.
Pat Kennedy (Basketball-‘70): Played at Kings College, and went on to coach at Lehigh, Iona, Florida State, DePaul and Towson.
The 1954 Varsity Football Team: NJ State Champions
The 1976 Girls Track Team: Undefeated, NJ State Champions

The Red Bank Catholic website will be updated with information regarding purchasing tickets and Ad Journal space for the June 18th Hall of Fame Induction Event.  If you have questions, please contact Joe Montano, Athletic Director, montanoj@redbankcatholic.com 732-747-1211 or Kate Gotta, Director of Alumni, gottak@redbankcatholic.com.

We would like to thank our extended Casey Family for all their support and for helping to make the RBC Athletic Hall of Fame such a success. We thank all those who came back to campus to join us in celebrating our first two Inductee Classes, all of our volunteers, and everyone who supported our efforts with sponsorships and ads in the Ad Journal. Because of this outpouring of support, we are able to augment the RBC Financial Aid Fund to help make our Casey home accessible to all who wish to become a part of the Red Bank Catholic tradition.